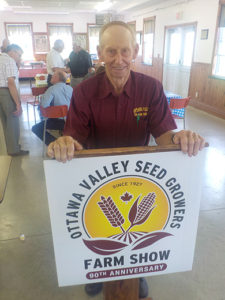 Vankleek Hill – In preparation for its 90th anniversary next year, the Ottawa Valley Farm Show is undergoing a rebranding exercise encompassing everything from its logo and web site, to signs, banners and custom clothing.

The 90th farm show will take place March 14-16, 2017. It coincides with Canada’s 150th anniversary, another reason to make the celebration as significant as possible. Special displays, entertainment and guests are being planned.

Since 1927, the show has been sponsored by the Ottawa Valley Seed Growers Association which held its annual meeting at the Vankleek Hill fairgrounds Aug. 8. The location was chosen by Seed Growers president Cecil Cass whose family has farmed in the area for more than 200 years.

Well into his eighth decade, Cass has completed the first year of a two-year term as OVSGA president. He shows no sign of slowing down, and his contribution was acknowledged with a warm round of applause from meeting attendees.

The meeting included business portion, ham, scalloped potato and home-made pie lunch, and bus tour of the Vankleek Hill area, including the Cass farm which includes 1,200 mostly-owned acres of cropland and a 90-acre sugar bush.

The tour also stopped at l’Orignal Jail, Ontario’s oldest prison dating back to 1825 and decommissioned in 1998.  It’s now a tourist attraction. Jokes flew about which members should be left at the jail when the bus departed.

The final stop was at Vankleek Hill’s pride and joy, wildly successful Beau’s Brewery where samples of various beverages were on the house. Over the past decade, the local Beauchesne family has transformed a defunct leather factory into a multi-million dollar craft brewery.

During the meeting, association secretary-treasurer Arlene Ross reported on the association’s sound financial status. The financial statement includes sponsorships and donations to the Children’s Hospital of Eastern Ontario, agricultural research, 4-H, and other causes totalling more than $35,000.

For the first time, OVSGA has placed funds with Hensall District Co-OP along with its investments in traditional banking institutions. In September, members will visit the co-op as part of a bus tour to the Outdoor Farm Show.

In other business, the executive was reappointed, and an election was held bringing on three high-profile Eastern Ontario farm leaders as directors-at-large: Colleen Acres of Osgoode, Lois James of Russell, and Don Giff of Smiths Falls.

Members were updated by Communications Committee Chair Shelley McPhail on the finalized new logo which illustrates with stylized crops rising from a farm field the mission to provide an annual showcase for championship seed, feed and forage products, modern agricultural equipment and technology, livestock breeds, and related services.

When the farm show was launched in Renfrew County, it was a rotating seed and feed competition. Over 90 years, it evolved into a multi-faceted exposition with the seed and feed component still at its core; it was centralized at Lansdowne Park in Ottawa and relocated six years ago to the EY Centre near Ottawa International Airport.

With the help of a professional consultant, the colours chosen for the new logo are modern variations of the traditional purple and gold. The shape is circular and includes the words: “Ottawa Valley Seed Growers Farm Show since 1927.”

The new logo is much easier to read than the one it replaces which shows three flying geese in a crowned circle with the slogan: “We aim at the best.” The exact origin of the logo has been long forgotten and members have noted there’s no love lost these days between farmers and Canada Geese. The biggest problem was that the geese logo didn’t show clearly when reduced.

The logo has been applied to business cards, information sheets and will be an important feature of the new web site now under construction. Site features will, for the first time, include online ticket sales and fully interactive booth renewal and application forms.

This site uses Akismet to reduce spam. Learn how your comment data is processed.