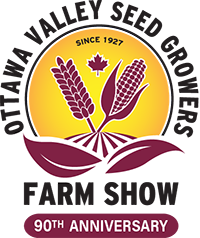 In honour of its 90th anniversary, the Ottawa Valley Seed Growers Association has established a $2,500 annual scholarship to recognize interest, knowledge and achievement in the Eastern Ontario agricultural community.

The new program has been introduced partly to replace scholarships the Seed Growers sponsored for students at the former Kemptville Campus of the University of Guelph. The university announced in 2014 it was cutting ties with the satellite college.

The $2,500 scholarship was proposed by past president John Roosendaal and quickly endorsed by other directors who felt it would be a good way to mark the landmark anniversary of both the association and its Ottawa Valley Farm Show March 14-16 at Ottawa’s EY Centre.

Several other projects have been completed or are in the works to recognize the 90th, including a new logo, wrapped pickup truck provided by Bean Chevrolet Buick GMC Ltd. of Carleton Place, entertainment during the show, a commemorative quilt, meals focusing on local chicken, beef and pork, and special edition mementos available for purchase.

The scholarship is intended for Eastern Ontario students enrolled in at least the second year of studies at any college or university who are planning to pursue a career in agriculture. An application form is available at www.ottawafarmshow.com and must be returned by June 30, 2017.

“It’s one of the ways we have of encouraging participation in the agricultural industry… which is what we’re all about both at the association and the farm show,” Roosendaal commented.

This site uses Akismet to reduce spam. Learn how your comment data is processed.